Brotherly Loves
Matt and Ted Lee’s Seven Favorite Mail-Order Treats
By JJ Goode
. . .
“Matt and Ted Lee have gained a reputation as Southern gentlemen who want to share their love of down-home food—both through their cookbooks (like The Lee Bros. Southern Cookbook and their latest, Simple, Fresh, Southern) and their passionately curated mail-order venture, Lee Bros. Boiled Peanuts Catalog ( boiledpeanuts.com). But the duo’s good taste isn’t limited to delights from Dixie—here, they’ve chosen their favorite epicurean deliverables from all over the U.S. of A.”
. . .
See the full article and find out our favorites here:
http://www.details.com/style-advice/food-and-drinks/200910/mail-order-food-lee-brothers

. . .
“Charleston natives Matt and Ted Lee have done modern cooks a favor in their just-published cookbook, where this recipe comes from. Southern cooking is not just about the long-simmered thises and thats; their newfangled chicken and dumplings takes 35 minutes, and their pimento cheese potato gratin takes just 45 minutes.”
. . .
See the full article plus the recipe here:
http://projects.washingtonpost.com/recipes/2009/11/04/easy-shrimp-creole/

Ted and Matt Lee to sign their second cookbook
By Jennifer Biggs
. . .
“Matt and Ted Lee didn’t set out to be purveyors of Southern food, or cookbook writers.

When they left Charleston, S.C., for college, Matt went to Harvard and Ted to Amherst, then on to the prestigious Iowa Writers Workshop.

But after school, living in New York, there was a problem: No boiled peanuts.”
. . .

The Lee Bros. simplify Southern cooking
. . .
“The name of the new Lee Bros. cookbook is “Simple Fresh Southern.” Those are three words that many cooks don’t tend to put together. But Southern food is changing.”
. . .
Click here to see the full article:
http://www.heraldsun.com/pages/full_story/push?article-The+Lee+Bros-+simplify+Southern+cooking%20&id=4259493-The+Lee+Bros-+simplify+Southern+cooking&instance=homefifthleft

The Lee Bros. new cookbook takes an easy weeknight approach to Southern food
Get Fresh with Matt and Ted, by Stephanie Barna
. . .
“Their last cookbook The Lee Bros. Southern Cookbook became a staple on the shelves of cooks from the South all the way up to the northern reaches of the country. They shared classics like summer squash casserole and shrimp and grits, and they made new crowd favorites with dishes like butterbean pâté.

In their latest cookbook, they tackle the easy, weeknight meal. “This one is more about how we cook in Charleston day to day,” says Ted. “Family-style stuff. More riffing on fun Southern ingredients than authentic Southern recipes.” ”
. . .
See the full article here:
http://www.charlestoncitypaper.com/charleston/a-new-cookbook-takes-an-easy-weeknight-approach-to-southern-food/Content?oid=1507016 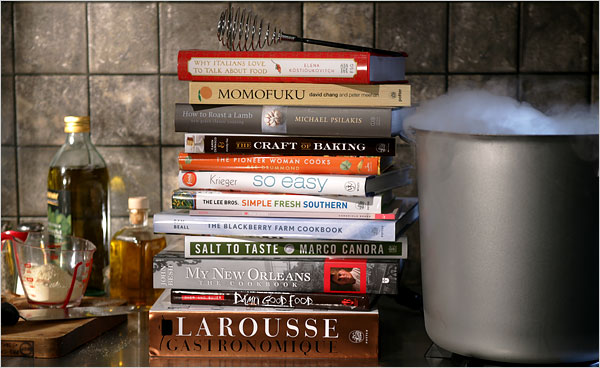 Tony Cenicola/The New York Times
The New York Times includes Simple Fresh Southern in a roundup today of “this Fall’s best cookbooks!”
. . .
“But Simple Fresh Southern (Clarkson Potter, $35), by Matt and Ted Lee, who have written for The New York Times, is a chronicle of what happens when they go to New York instead. Twists on tradition like Easy Shrimp Creole (without a roux, but with smoked paprika and sausage) and the brilliantly greasy Pimento-Cheese Potato Gratin might get them drummed out of Charleston, where they grew up, but they’ll be most welcome elsewhere.”
. . .
Check out the full article on their site here:
http://www.nytimes.com/2009/11/04/dining/04book.html?pagewanted=1&_r=1&sq=simple%20fresh%20southern&st=cse&scp=2

Just in from Publishers Weekly

“The Lee brothers’ second cookbook builds on the success of The Lee Bros. Southern Cookbook by applying the principles of the current fashion for simplicity and speed in the kitchen to the revered down-home flavors of the South, which normally require far more extended cooking times and special ingredients. Readers who are nostalgic for the food of the South or have acquired a taste for it, but lack the time to recreate old-fashioned dishes, will be eager to try the brothers’ new takes on old classics like chicken and dumplings, shrimp cocktail and ambrosia, which cut down on some of the usual preparation time without sacrificing flavor. They manage this partly through their judicious use of less traditional ingredients, such as curry powder in potato salad or chorizo in collard greens and partly through their emphasis on using top-notch fresh, in-season ingredients. Though the brothers got their start with a catalogue selling Southern pantry staples that are unusual elsewhere, these recipes rarely call for items that are not available in any well-stocked supermarket. The recipes are easy to follow and engagingly written, dotted with amusing anecdotes and historical asides that make the book a breezy read. Detailed shopping, preparation and garnishing notes throughout help ensure cooks’ success following the Lee brothers in bringing Southern cooking into the 21st century.”
Copyright 2009 Reed Business Information

Here’s a rundown of recent press:

The Today Show was awesome, and a nice surprise was bumping into John Grisham. His segment preceded ours and when he saw the teaser of the Pimento Cheese Potato Gratin he had Matt Lauer bring him up to the kitchen studio to introduce us to him.

Gearing Up for the Today Show

Gearing up for the big day Tuesday, practicing our catfish-frying for the Today Show appearance. And packing the bags to head out on the road for three+ weeks. Matt’s new baby, Arthur, and wife Gia are coming along for the experience!

A brilliant, gleeful, fly-on-the-lip-of-a-saucepan narrative, full of tips and secrets, and proof (yet again) that some of our greatest stories are in how we make food. You will never ever take a passed hors d’oeuvre for granted.