Check out the assortment of exquisitely handcrafted chocolates we put together on OpenSky. http://osky.co/yaPk9O
These are from artisan chocolatier Sweeteeth, straight outta North Charleston, and suitable for giving to someone you love…or for inhaling yourself! While supplies last 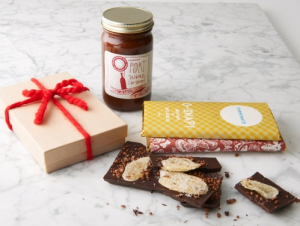 Sweeteeth is the newest, and most successful, small-batch chocolate maker in South Carolina. It’s the vision of Johnny Battles, who was working at a creative pizzeria in North Charleston (E.V.O.) when the chocolate bug hit him.

Johnny thinks like a chef, and it shows: in the quality of the ingredients, the handcrafted care that each bar receives, and in his flavor selections–exciting combinations that really work. These are chocolates with spice and flair, and they somehow feel distinctly Southern in spirit: cinnamon, apple and pecans in dark chocolate; white chocolate with crumbled ginger snaps; chocolate and port. And the visual look of the chocolates is edgy and sophisticated.

We’re chocolate skeptics, but we were blown away when we first encountered Sweeteeth chocolate at a shop in downtown Charleston, and just knew we had to bring these to our OpenSky followers.

The Surprising Charleston Origins of the “Garden & Gun” Name

From the headnote to our “Garden and Gun Cocktail” (bourbon-based, with lemon-inflected watermelon rind preserves) in The Lee Bros. Southern Cookbook (WW Norton, 2006), page 52:

“Charleston once had its own version of Studio 54, called the King Street Garden and Gun Club, founded by Richard Robison. A producer at the Spoleto Festival USA, the performing arts festival that takes over the town each year in late May and early June, Robison opened the Garden and Gun (which was all anyone ever called it) primarily as a place for the baritones and ballerinas from out of town to unwind after their shows, but the nightspot attracted a large local following, too. Although the Garden and Gun lasted only from 1976 (the founding of the Spoleto Festival) until 1981, the bar was deeply influential, and even today many Charlestonians claim it was the first bar in the city where people of all races and sexual orientations felt comfortable dancing together. We still hear people of a certain age waxing nostalgic about the dance scene at the Garden and Gun. There was never anything like it before, they tell us, and there hasn’t been anything quite like it since.
We were far from drinking age during the Garden and Gun’s heyday, but the phrase always captivated us for the way it effortlessly welds together two concepts that seem so at odds, the twee domesticity of “garden” and the frightening brawn of “gun.” It was only as we grew older that we realized it captures one aspect of Charleston’s soul: a little bit courtly and a little bit country. It’s a quality perhaps best articulated by one of Ted’s contemporaries at a debutante party. “Don’t you just love deb season?” said the young rake, taking a long slug of a gin and tonic. “Just change out of your camo [camouflage], and into your tuxedo.”

In this cocktail, the bourbon is the gun; the watermelon rind preserves, which is basically a simple syrup infused with lemon, ginger, and the cucumber-y freshness of watermelon rind, is the garden.

Get it while you can! Jack Rudy tonic syrup at OpenSky

We’re drinking gin & tonics year round since we discovered Jack Rudy tonic syrup, made in Charleston, which takes our G&Ts to another level in terms of flavor, nuance and quality: this is old-school tonic like it was made in the prohibition era, from bitter/sweet ingredients like quinine and cane sugar, aromatic/tart ones like lemongrass and citrus. This OpenSky offering begins today at the link below; the last time around Jack Rudy tonic sold out in just a couple hours (it’s pretty rare, even here in Charleston). Cheers, and we hope y’all enjoy! Click here to be taken to our OpenSky page

Congratulations to Pamela Lusby Bailey, randomly chosen to be the winner of our apron giveaway this week!! Pamela, please call the boiledpeanuts.com headquarters at 843 720 8890 so we can arrange to get your autographed apron to you.

Everyone stay tuned for future Tee-Shirt (and apron!) Tuesdays, and thanks for playing! (And in the meantime, if you absolutely NEED a Lee Bros. autographed apron, we can find them hidden away on the “kitchen essentials” page at boiledpeanuts.com!)

The proof was in the cooking–we spent the day yesterday in the SC State Farmer’s Market exhibition kitchen in Columbia, preparing the five winning recipes from the Lee Brother Your Holiday recipe contest, where each recipe had to include at least one SC-grown ingredient (in fact, most recipes we celebrated yesterday could have been composed almost entirely from SC ingredients if we could evaporate some SC seawater to make our salt!) We were blown away by the delicious and nuanced flavors our winners conjured up. They are:
Appetizer: Dawn Dausman’s Rosebank Farms Heirloom Pumpkin Bisque
Veg: Elizabeth Benfield’s Vegetarian Collard Greens
Entree: Beaumont Riley’s Apple and Prune Roasted Pork
Baked Goods: Rose Stancil’s Sweet Potato Pound Cake
Dessert: Ines Gillier’s Pecan Honey Tart

find all the recipes on the Certified SC site: https://www.certifiedscgrown.com/

Congratulations and thanks to all the winners, it was a privilege to meet you and to cook for you all!
Our deep gratitude as well to the sponsors: Piggly Wiggly, US Foods and Judy’s Restaurant at the SC Farmer’s Market.
Also essential to the success of the day were Chef Shaun and Chef Franklin of the exhibition kitchen, and our assistant for the day, Charles Dickson.

Friday, January 13th (time TBD) at the SC State Farmer’s Market demonstration kitchen, Matt and Ted will cook the five grandprize winners’ recipes in front of a live audience! Check back here, or at http://www.certifiedscgrown.com/ for time and more details.
South Carolina has a beautiful new State farmer’s market and demonstration facility! Check it out for the freshest wholesale and retail produce:
3483 Charleston Highway, West Columbia, SC 29172

Boiled peanuts are flying out this week to 34 states, from Washington to Louisiana to Massachusetts! (California was the boiled-peanut-hungriest state this year.) Today, Wednesday, is the last shipping day for delivery by Dec 25th (actually, we’ll ship Thursday if you’re willing to pay for overnight shipping…)
For the procrastinators, there’s still a day available, log your order at boiledpeanuts.com or by phoning us at 843 720 8890. If you get the voicemail, leave a message and we WILL get back to you very shortly. Thanks for your patience during this busy time!
Happy New Year!

Autographed copies of our second cookbook, The Lee Bros. Simple Fresh Southern, which won the IACP Award for Best American Cookbook and was a James Beard Award nominee, are now available from OpenSky. Check out the 100+ recipes for healthy, soulful southern food like Pimento Cheese Potato Gratin, Crispy-Skin Salmon with Buttermilk Mint Sauce, Banana Pudding Parfaits! This is the book that earned accolades from a wide range of folks who inspire us, from John T. Edge to Amy Sedaris, Alice Waters to Paula Deen, Martha Hall Foose to Mario Batali! Click here for details!

Country Ham Biscuits, by the dozens!

Our First Sale on OpenSky.com Launches Today With…Callie’s Country Ham Biscuits!
We recently became curators for the online shopping site OpenSky, and we’re super-excited to have gathered some of our favorite foods and kitchenwares from the South. Our first sale, of Callie’s Country Ham Biscuits, launches today, and the first 25 people that buy will get an extra dozen biscuits!
Follow us on OpenSky as we roll out more top-quality southern products–chefs knives by Middleton Made, Jack Rudy Artisan Tonic Syrup, and more!–in the next couple months. Click here http://osky.co/u2Ye9T to learn more, and to stock up on incomparably tender and delicious biscuits for the holidays!